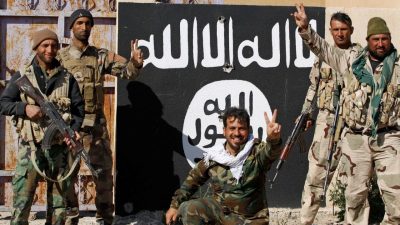 Dozens of extremist fighters have made their way from Syria’s northern Idlib governorate to Ukraine to fight against Russian troops, according to a report by Sputnik Arabic.

At least 87 former members of ISIS were allegedly transferred to the Syrian-Turkish border on 26 March under the direct supervision of the leader of the Hayat Tahrir al-Sham (HTS) armed group, Abu Mohammad al-Julani.

The report indicates that most of the fighters are Iraqi, Chechen, Tunisian, and French nationalities.

On 8 March, 450 HTS militants arrived in Ukraine to join the fight against the Russian army.

According to the family members of the militants, high-ranking HTS leaders have been coordinating with senior leaders of the Turkistan Islamic Party group, Ansar al-Tawhid, and Hurras al-Din groups, to facilitate the passage of the extremists from Idlib to Turkey and then on to Ukraine.

The NWO Establishment is treating you as if you might be an educationally sub-normal gnat.

Send this to any of your idiot family members still cowering in fear over this non-lethal flu bug. h/t The Burning Platform

Black Caucus Greens Wrong Kind of Green The Green Party of the United States Black Caucus (GP-BC) has announced its support for the Freedom Convoy, an educational effort to help the public learn more about vaccine mandates and the best way to respond to government overreach. “We are calling on all people to unite in […]

Malone, McCullough: Get Politics Out of Healthcare, Let Doctors Practice Medicine — Tales from the Conspiratum

Some people have had enough and are throwing their smart phones into the trash and replacing them with ‘dumbphones’ instead. Source: Zero Hedge In a time when various “developed world” intelligence agencies are filling up petabytes of hard disk space with domestic phone recordings and tracking their own citizens who – in the pursuit of…

Yesterday I reported on the shooting of captured Russian troops. Disturbed that there was nothing evident about this on the radio, in parliament, anywhere mainstream I did a more thorough search and came across this from the Murdoch-owned bum-paper chain. That the whole idea of crippling yourself probably for life is a better option than […]

The Nazi Sun is rising — All the Goss

English author and radio host Maajid Nawaz spent three hours on the Joe Rogan Experience in January, a highly intelligent conversation on many topics. In this ten minute clip from the full interview, he offers a glimpse of light into something which, for me, has appeared very dark for two years. An intelligent analysis of […]